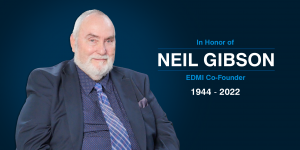 We are heartbroken to announce that Neil Gibson, co-founder of EDMI passed away last week at the age of 77.

Neil Gibson founded the company as EDMQ (Electronic Design and Manufacturing Queensland, former name of EDMI) in 1978 in Australia alongside his friend, John Flood. In developing a vast array of technology products – everything from sign logic controllers, to public announcement systems, water management solutions and more, Mr. Gibson was dedicated to developing his knowledge and technologies across many fields. Complemented by Mr. Flood, the pair were the original champions of EDMI’s mission to challenge themselves and their colleagues to bring new and exciting ideas to market.

It was as a direct result of their leadership and vision that the very first grid interconnect meter Mk1 was brought out to the market in 1990, followed by the revolutionary Mk3 smart meter for the C&I sector in 1995. These releases redefined smart metering in Australia and internationally, and laid the foundations for EDMI’s dominant position in the global smart metering market.

EDMI is honoured to have inherited Mr. Gibson’s passion, innovation, knowledge, and collaborative spirit as part of our DNA today. Mr. Gibson will be deeply missed by all his family and friends at home, including the EDMI family.